Dr Tremblay is proud to act as a spokesperson for The Rosacea Society of Canada. For over 15 years he has treated hundreds of patients yearly, afflicted with this condition which has a major impact on skin health and quality of life.

Dr Jean-François Tremblay completed his specialization in dermatology in California before acquiring an over specialization in laser surgery. Owner of the MédIME clinic situated in the Mount-Royal Sanctuary for 15 years, Dr Tremblay has had the opportunity to treat thousands of clients affected by rosacea. His expertise will be used for the democratization of rosacea within the Canadian population.

Rosacea affects 3 million Canadian ages 30 to 50 years old. It is a common skin disease, benign but chronic, and often hereditary. Women seem to be more affected than men, but severity is more pronounced in men.

Rosacea often begins around the age of 30 years old, even if people report always having had sensitive skin, subject to redness, during their childhood and their teens. Rosacea is a chronic disease that is characterized by facial redness and evolves in successive waves. The redness will diffuse itself progressively, with an affectation of the epidermis that can be more or less vivid. The faster we react, the higher the chances of treating it easily.

There are 4 stages of rosacea.

During abrupt temperature shifts, after drinking wine or eating spicy foods, redness appears suddenly on the face and neck, along with sensations of heat. The skin returns to a normal state after approximately 30 minutes. The skin is more reactive to products than before and skincare products can cause redness, sensations of heat, and tingling. People often claim to be “allergic” to everything.

The skin becomes more and more sensitive and reactive. Redness is now diffused particularly in the area of the cheeks and the nose. The redness is now permanent. We can also observe dilated capillaries, characteristic of the couperose. Flushing of the affected areas, accentuating the redness, also occurs.

Eruptions of bumps on inflamed areas begin. These bumps are not acne, but small red indurated bumps. These are what we call papulopustules. They have a tendency to flare-up in the same areas repeatedly, especially in early development.  They can disappear without treatment and then return. These are waves that evolve progressively and can have periods of remission. They can spread to the whole face.

The skin is struggling, rather dry, and becomes intolerant to many cosmetic products, notably oily cosmetics.

If a dermatologist has not been consulted, it is important to do so at this stage to avoid evolution to a more severe stage that will be longer to treat.

At this stage, the dermatosis takes a difficult turn on the aesthetic level. The nose can have an augmented volume, redness, and the skin pores are dilated. This later stage mainly affects men over 50 years old.

Luckily, treatments are available and effective for rosacea. The treatment of rosacea begins with solar protection and the adoption of a skincare routine that is adapted to the condition. Certain medications can be prescribed to treat the inflammation and the bumps. The Vbeam laser targets vascular lesions and contributes to reversing the evolution of rosacea. The Vbeam, a technologically advanced pulsed dye laser, utilizing yellow light, is used for treating many skin inflammation conditions such as rosacea. Its light beam is absorbed by red blood cells contained in blood vessels running near the surface of the skin. Heating of the blood vessels results in their destruction within a few weeks.

The duration of a treatment session varies between 5 and 30 minutes depending on the zone to treat, and 1 to 4 sessions can be necessary depending on the stage of the rosacea. A consultation will be required before your first treatment to determine the number of sessions required. 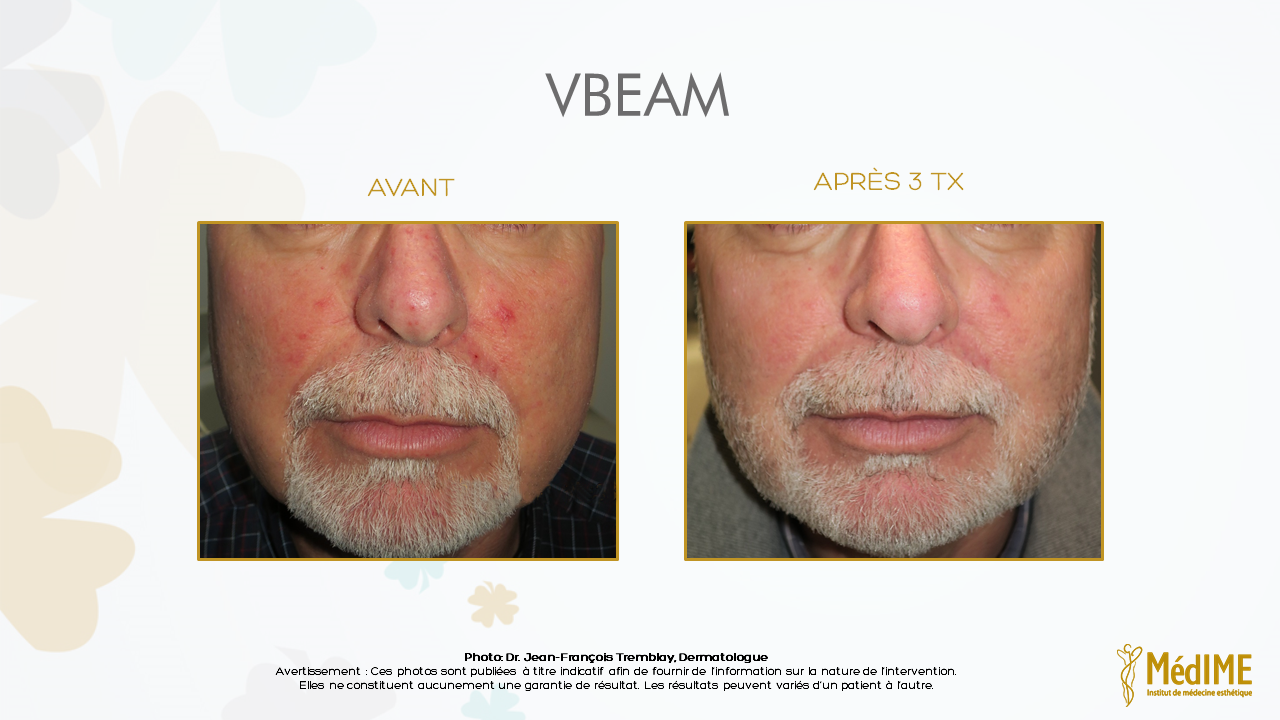 If you think you are afflicted with rosacea, you can request a free consultation at MédIME with one of our consultants by calling 514 739-7444 or by completing the appointment form.

Want to join the discussion?
Feel free to contribute! 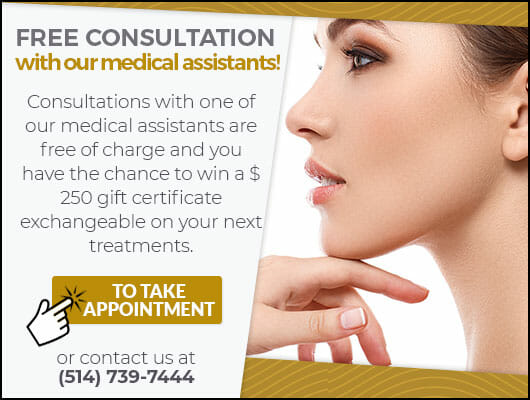 Microneedling RF and eMatrix technologies – The perfect combination for...